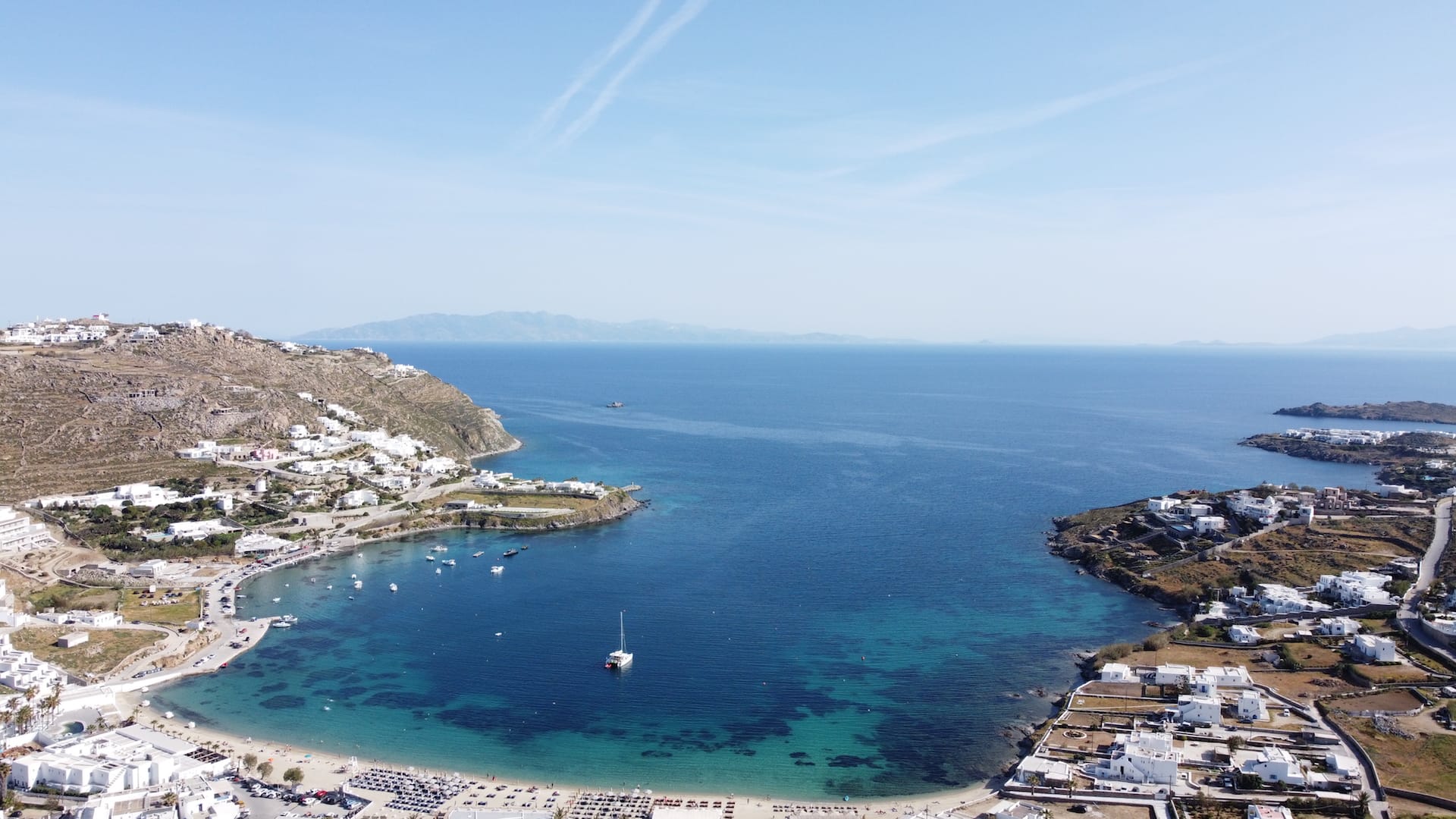 2,5 km southwest of the bustling capital, seaside Ornos is pure whitewashed Cycladic charm and all about the indulgent lifestyle. At a stone’s throw from the world-famous sights and attractions in Mykonos, including the fashionable labyrinths of Chora and the paradisiacal southern beaches, Ornos is the perfect base from which to experience the island of the winds.

In fact, nobody would blame you if you just stayed and played at this sandy beach’s gin-clear waters: Popular among families, foodies and bon vivants alike, Ornos is home to some of the best eateries in Mykonos serving anything from first-rate gourmet fare, authentic sushi or pizza to traditional and Mediterranean cuisine. It moreover boasts a wealth of idyllic Mykonos sunset lounge bars, the kind that you see plastered on your Instagram feed every summer. As the 2nd largest settlement on the island, Ornos also sports a wealth of facilities to cover all your needs: From top-class coiffeurs and nail salons to indulgent Spa amenities; and from designer boutiques to a well equipped outdoor gym, you will look and feel your best at all hours.

If you are into beach lounging, Instagram- perfect cocktails and enjoying the good life, then you need not move any further from your luxury sunbed. As for those with wanderlust, Ornos delivers too. This time by offering swift and easy access to Mykonos’ paradisiacal southern shores with boats departing regularly throughout the day. From traditional, wooden vessels to modern catamarans and speed cruisers, you may take your pick as your mood strikes you. The same goes for the beaches you’ll choose to visit: From celebrity haunts to popular nudist spots, there is something for all. As for the incurably romantic, watching the sun set over Delos in neighbouring Agios Ioannis, is an experience to be savoured.

Here are our handpicked suggestions of the top attractions in Mykonos, Ornos:

Boat tour to Mykonos southern beaches: From Platis Gialos through to Kalo Livadi, experience Mykonos’ trademark blue and gold shores with a round trip starting in Ornos.

A wide, sandy beach with well-organized facilities including sunbeds, restaurants, water sports and water games. It is hugely popular with families and water sports enthusiasts.

A favourite of the younger set, it has fine sand, blue waters and an amazing view to ancient Delos. Supremely organised, it is home to some of the most popular beach bars in Mykonos.

A popular party spot with a nudists’ section and water sports facilities.

The Mediterannean’s party central has golden sands and turquoise waters; and a homonymous beach bar that lends it worldwide acclaim.

Sheltered and quieter, this long, golden sandy stretch is preferred by many nudists. There are umbrellas, sunbeds and water sports facilities albeit on a smaller scale.

A large and well-organized beach with sunbeds and popular beach bars, and a vast choice in water sports. It is also favoured by the gay and nudist communities.

Ornos village is located on a narrow, isthmus-like piece of land that separates the main island from the peninsula of Agios Ioannis. Within walking distance, on the opposite side of the south-facing Ornos beach, there is a quieter stretch of sand abutting a deeply cut bay: With stable onshore wind, soft sands and shallow waters, the much less crowded, Korfos beach is a kitesurfer’s paradise, ideal for beginners and pros alike. There is a kite school for the necessary equipment and know-how, a small surf spot and sun loungers for those who just want to admire the action and the vistas.

Take a break from the frenzied Mykonian days and nights at the sacred island of antiquity.

Spreading over 3,4 sq. km, a few miles away from the shores of Mykonos, Delos, was the mythological birthplace of twins Artemis and Apollo. With a population of 30.000 in its heyday, it was also the most important religious and commercial centre of the ancient world: A golden city resplendent with columns and mosaics, statues, an ancient theatre, palestrae and wealthy neighbourhoods. And though its star shone brightly over a long period, historical developments eventually brought it into oblivion. It was not until the late 19th century, with the excavations of the French Archaeological School of Athens, that this architectural wonder was once again brought to light. Nowadays a UNESCO heritage site, Delos and its remarkably well preserved archaeological site are open for the world to admire.

Get lost in the alleys of Mykonos Town

Sugar-cube, bougainvillaea-clad, houses built next to and on top of each. A Medieval labyrinth of cobblestone alleys lined up with designer shops, jewellery stores, smart cafes, restaurants and bars. Rows of thatched windmills towering above the waves. A colourful seafront neighbourhood that evokes Venice. A whitewashed, asymmetrical and distinctly quaint church that dates back to the 15th century. A funny-looking white and pink bird with a beaky nose posing next to this Hollywood star or the other: You have probably seen images like these on your Instagram feed during the summer. Just 3,5 km far from Ornos, Mykonos Town is brimming with iconic, and impossible photogenic, sights and spots. Get lost in the maze-like streets, shop till you drop, go celebrity spotting, dance your worries away… Choices abound. Just take it all in and leave with memories that turn to fascinating stories.